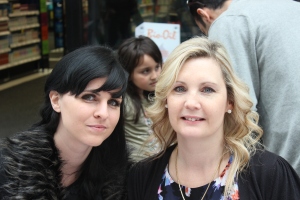 Saturday 13th September was a great day for local authors, young and old. Both myself and Alexandra Murphy hosted our ‘Author Day’ at The Foundry, Scunthorpe. The writing event was created to show aspiring writers that getting their work published may not be as hard as they often think. If they have the ability and follow a few simple steps it can be possible to have your book in print (or at least Kindle form) before you know it. 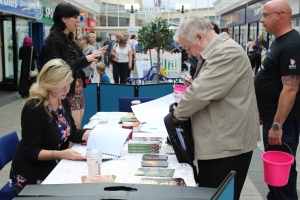 The day began at 10 am but before we had even started, aspiring writers were flocking to the stand to ask for help and advice about their manuscripts. Firstly I met a gentleman who was 76 years old who had written four short stories about ‘Dad’s Army’. Unfortunately, due to copyright issues, this man couldn’t publish his anthology and so we worked on an idea of re-inventing his tales during the war. He was such a warm and friendly guy and he had already had three books published previously. We chatted for quite a while and he went away a little happier knowing he could do something with his characters, finally get his stories published and more importantly, avoid being sued. I also gave him some guidance when it came to his fictional characters. Any writer should always protect themselves by adding this statement to the beginning of their book:

“All characters and events in this publication other than those clearly in the public domain are fictitious and any resemblance to real persons, living or dead, is purely coincidental.”

This will help keep you safe as a writer, especially if someone decides that they are an actual character in your book, (whether this is true or not). The last thing you need is someone asking for part of your royalties or worst, taking you to court for liable. Always protect yourself no matter how much you think that this won’t happen to you. Believe me it happens more often than you probably realise.

Whilst I was delving into the second world war, Alexandra was chatting to a lovely lady who was writing a historical romance. The difference 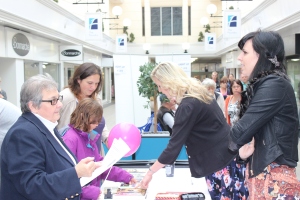 here was it was a gay romance and because she was in her latter years she had found the courage to finally  write the story she had always wanted. Alexandra  writes romance and this enabled her to advise the novice writer. She also showed her the many different routes there were to publishing her book and shared ways of marketing and promoting her work. I think this writer went away very happy by the time Alexandra had given her a few leaflets to take away with her which would help her to digest everything they had been talking about. 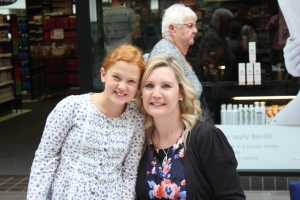 As the day drifted into the early afternoon, writers just kept on coming. I was in no doubt,  Scunthorpe was filled with talented writers and the day just flew by. Some people had come specifically to buy my books which was wonderful. I met several readers who were visiting Scunthorpe to grab a signed copy of the ‘Magic’ trilogy, which as an author simply made my day. I also met Anna, who is a big fan of the trilogy and who is only ten years old. Anna came to see me with her manuscript because she needed help with the ending to a story she was writing. I was totally blown away by her enthusiasm which was like a beacon of light and it shone so brightly it almost blinded me! She was so passionate about her characters I could have talked to her all day. You could see how her mind was creating lots of fascinating ideas and Anna was supported by her mum and dad. I felt we had an authoress in the making and I think we should keep an eye out for Anna when she’s a little older. I believe she might just give me a run for my money.

Before we knew it, it was 2 pm and time to go home. By then, I have to admit we were both exhausted. The day had been a brilliant success and we had met many walks of life including students from John Leggott College as well as other published authors from the town. We hadn’t stopped all day and the mountain of giveaways had proved very popular.  I have to admit, the people of Scunthorpe accepted us with open arms and I can’t wait until we meet up with them again. A huge thank you to David Lane who arranged the event on our behalf and of course to The Foundry for sponsoring the ‘Author Day’ and making it all a reality. 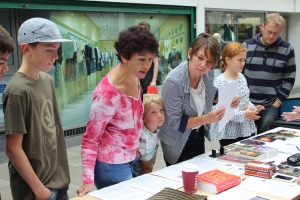