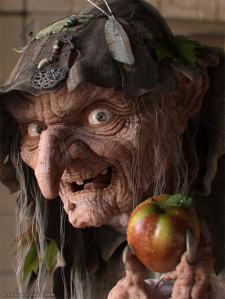 A very powerful character in my story is the witch ‘Lilura.’  Lilura is paid by the King of the Elves to exchange a baby (Crystal) for one that has died in the ordinary world.Description of Lilura: Lilura was dressed in long, dark robes, which rested on the straw-covered floor. The hem of her clothing was tatty with age, a string of dried dirt clinging to the bottom of her garment. She was old enough to be his great-grandmother, and her skin was dry and paper thin, wrinkled in some places and stretched to the point of splitting in others. Her face was haggard beyond  any recognition, but her eyes were sharp and alive.

I think Jennifer would make the perfect ‘Crystal’  She looks almost elfish and is a very beautiful young lady.
Description of Crystal: She was a willowy creature with slender limbs and artistic tendencies. Her long auburn hair had been allowed to grow out of its girlish bob and it fell down her back like a moving cascade of hot lava. It was so rich in colour and thickness that it was outrageously sinful, the deep russet tones accentuating her eyes which were a dazzling shade of sapphire blue, protected by a row of long, silky lashes. There was not a shadow of a doubt; Crystal would mature into a strikingly, beautiful woman.

Zak Effron to Play The Part of Matt

When Crystal returns to the Kingdon of Nine Winters she takes Matt along with her and he is plunged into a magical world that he has no control over.

I would love Chris Hemsworth to play Bridgemear.The magician Bridgemear is ‘Crystal’s immortal father and one of the ‘Sinners’ of the story.  He is brother to a powerful band of mage’s who live in a beautiful place called ‘Raven’s Rainbow’ and for his crimes against the realm, the Elders declare that his new born daughter is to suffer eternal purgatory.

I think with his devilish good looks and his air of mystery Ed would make a very devious King Forusian.

Did You Know There Are Dragons In This Story Too?

This picture reminds me of the scene in my book where
Tremlon the shape-changer creates a miniature dragon to impress Crystal but the dragon sets off the fire alarm in the library causing a major dilemma for the elf!

This site uses Akismet to reduce spam. Learn how your comment data is processed.